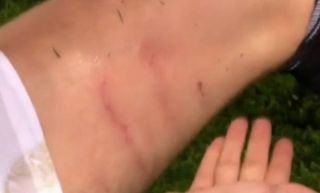 Alexandre Jankewitz’s tackle on Scott McTominay looked pretty poor on first viewing, but it seems to get even worse when you look at the Scotsman’s leg afterwards:

In a way it’s easy to feel sorry for the Southampton man as it just looks like he’s trying to impress and he’s failed to control his enthusiasm, but it was also one of the clearest red cards you’ll see all season.

McTominay was able to stay on the pitch so it looks like the wounds are mainly superficial, but it’ll probably sting a bit in the morning.

READ MORE: Video: Southampton’s Jankewitz sent off in the second minute of his first start with a horror challenge on Scott McTominay