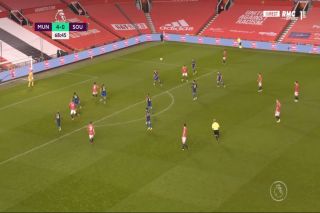 In the 68th minute of tonight’s Premier League encounter against Southampton, substitute Anthony Martial got in on the action to make it 5-0 to Manchester United against the 10-men Saints.

The fact that Harry Maguire was in the final third and dishing out a pass to Bruno Fernandes was a clear show of United’s dominance this evening.

The Frenchman, who has looked unconvincing as of late, kept the ball under lock as he fired a powerful shot into the back of the net from a tight angle.

Head over to the BT Sport App now to get yourself in on the action ? pic.twitter.com/LaualuTOGz

What a merciless performance from Ole Gunnar Solskjaer’s side this evening.