Eduardo Camavinga is highly regarded as one of the most exciting teenagers in European football
right now.

His performances have seen him become one of the most talked-about young players in Europe,
leading to links with many top European clubs, most notably Real Madrid and Manchester United.

Marca reported last month that Camavinga was on Real’s shopping list for the summer, while Manchester Evening News linked him to Manchester United in December, although it was suggested a move could hinge on Paul Pogba leaving Old Trafford.

The Irish Mirror, who refer to Camavinga as the next Pogba, claimed last week that Tottenham Hotspur, Juventus and AC Milan were also keeping tabs on the player.

The talented midfielder was born in Mincoge in the Cabinda region of Angola to his Congolese parents. His family immigrated to France when he was two years old in search of a better life, settling in Fougeres, Brittany, where he and his five siblings grew up.

Camavinga joined local club Rennes at the age of 11 after impressing with amateur side AGL-Drapeau Fougere. He immediately impressed the club with his technical ability, tactical awareness and implementation of instructions from academy coaches.

He signed his first professional contract with Rennes on December 14 in 2018 at the age of 16 years old, becoming the youngest ever professional for the club.

The youngster quickly became an integral part of the Rennes reserve side, scoring four goals in 13
appearances for the second string side.

Rennes manager Julien Stephan was impressed with Camavinga’s ability on the ball and positional understanding despite his young age. Stephan handed Camavinga his professional debut for Rennes in the 3-3 draw against Angers in Ligue 1 on April 6, 2019, making him the youngest ever player to feature for the first team.

But it was Camavinga’s performance against Paris St. Germain shortly after that turned heads across European football as he earned a man of the match award. He was sensational in central midfield and recorded an assist in the 2-1 victory over the Ligue 1 champions.

Camavinga made his senior debut for the France national team on September 8 in 2020, against Croatia in a 4-2 win at the age of 17 years, 9 months and 17 days old.

Camavinga has shown maturity beyond his years with some impressive and controlled performances since breaking into the Rennes first team.

The 18-year-old wonderkid is a central midfielder by trade and has earned comparisons with French
World Cup winner Pogba. But Camavinga is almost a blend of France’s three main midfielders – N’Golo Kante, Blaise Matuidi and Pogba. He is excellent in the tackle, a marauding box-to-box midfielder and also an elegant, imaginative midfielder.

At club level, the Angolan-born prodigy is a vital cog in Stephan’s Rennes midfield alongside Benjamin Bourigeaud in the engine room. Camavinga operates as a deep-lying midfielder, setting the tempo, building attacks for his side whilst screening the middle of the park to provide protection to the defence. He has shown during his first 18 months playing in Ligue 1 that he can also operate as an old-fashioned defensive midfielder.

Rennes manager Stephan, who is a former defensive midfielder himself, has worked closely with
Camivinga on the defensive aspect of his game, whilst World Cup winner Steven Nzonzi has mentored the young sensation since arriving at the club in 2019.

Stephan’s Rennes side are known for their aggressive pressing style as his team try to win back possession in the opponent’s half of the pitch. Despite his deep starting position, Camavinga is vital to Rennes aggressive pressing as he possesses great stamina, which allows him to support his team’s press before returning to his positon if the turnover attempt is unsucessful. Furtermore, his pace allows him to cover ground quickly, which is essential when being deployed as a central midfielder in the modern day.

Despite being regarded as a defensive-minded midfielder, he has some impressive
aspects of his attacking game. He has an excellent range of passing which was evident in his break out
performance against PSG, where he made 41 passes with a 98% success rate. Camavinga dictates play with short passes as he does not tend to play long passes. He has a passing accuracy of 89% in Ligue 1 so far this season. The teenage sensation has four assists and two goals in 66 appearances for Rennes. 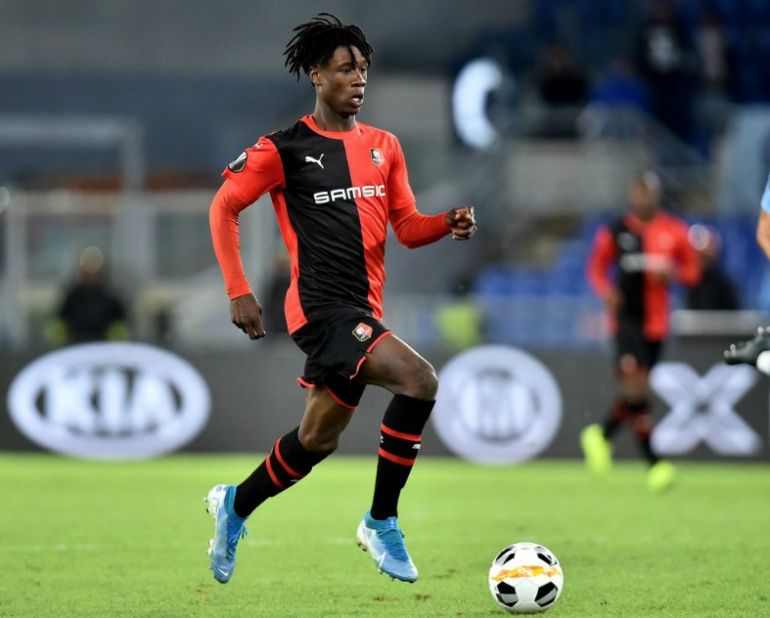 What do people say about him?

After Camavinga’s exceptional performance against PSG, former Rennes academy director Landry Chauvin was quoted by Bleacher Report in 2019 as saying: “He has this simplicity that brings the ball to life.

After giving Camavinga his France debut in 2020, Didier Deschamps suggested that he was almost undroppable.

Deschamps told GOAL: “I don’t really want to put him out of the squad or the team considering how he plays. Let’s see, he is still young.

“I need to manage him like Julien Stephan is managing Eduardo at Rennes. He will play every three days soon; he is a very young player with a lot of great skills and huge talent.”

And Rennes sporting director Florian Maurice told RMC Sport last year, as translated by AS English: “Since my arrival, I was clear that Camavinga would be included in the project.

“If Real Madrid offers £80 million for him as is being linked and talked about, the simple answer is no. We want him to stay so he keep developing and contributing at Rennes.”