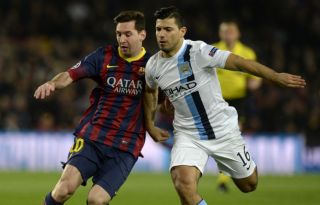 It’s fairly clear that Lionel Messi’s future at Barcelona largely depends on who wins the Presidential election, but it could also come down to the players that are signed in the summer too.

He’s only got a few years left at the highest level so he won’t want to spend that with a Barca side that are rebuilding and have little chance of silverware, while it still feels like he will move on.

Ronald Koeman recently admitted that he was now hoping Messi would stay rather than expecting it to happen, while it also looks like Barca are doing all they can to irritate him after his contract was recently leaked to the press.

It does mean they would need to pull out all the stops to keep him around, so signing fellow Argentine superstar Sergio Aguero could be a gamechanger this summer:

It’s been reported that Aguero is willing to make the move and he’s already been contacted by a few of the Presidential candidates about making it happen, but it would all depend on Messi sticking around so he could link up with him.

At least it would begin to make up for giving Luis Suarez to Atletico Madrid as they now look destined to win La Liga with him, but would it be enough to convince the great man to stay?