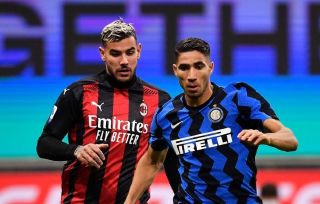 Chelsea and Arsenal are reportedly expected to be among the transfer suitors for Inter Milan right-back Achraf Hakimi in the summer.

The talented 22-year-old looks to be one of the finest young players in Europe at the moment, having shown himself to be a superb attacking full-back at Inter and at previous club Borussia Dortmund, where he caught the eye on loan from Real Madrid.

According to Calciomercato, it now looks like Hakimi will have a number of big-name suitors at the end of this season, with Chelsea and Arsenal named as among the sides who want to bring him to the Premier League.

The Morocco international could certainly be a useful signing at the Emirates Stadium, with Hector Bellerin not really living up to expectations in recent times, while Ainsley Maitland-Niles has also struggled for playing time and gone out on loan to West Brom.

Hakimi could be ideal to give Arsenal the kind of attacking full-back that is so essential in the modern game, and help take Mikel Arteta’s side to the next level.

Chelsea, meanwhile, have the exciting youngster Reece James on their books, so don’t seem to have as urgent a need for Hakimi.

However, the Blues have shown their ambition in the transfer market in recent times and would no doubt be tempted if a player of this calibre became available.

It would also be important for either of these London rivals to beat the other to Hakimi’s signature to avoid seeing a fellow top four contender majorly strengthened.