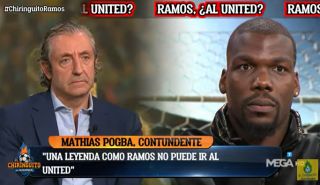 Manchester United fans won’t be too impressed as Paul Pogba’s brother Mathias has once again weighed in on the midfielder’s Old Trafford future.

Speaking on El Chiringuito in the video below, Pogba warns that if United don’t sell hi brother this summer, he’ll be leaving the club on a free transfer…

This strongly suggests Pogba is aware that his brother won’t be signing a new contract with United, with more unhelpful speculation over his future.

This ties in with what Fabrizio Romano told CaughtOffside last week as he expects a departure this summer is still the most likely outcome for Pogba.