Cristiano Ronaldo’s hunger for goals has taken him far in his career – but did it go too far this evening?

The Juventus forward already netted in the first-half of his side’s clash with Roma, but as is often the case with Ronaldo, one goal was not enough.

After the Portuguese superstar rattled the crossbar with a thunderous strike, he approached the referee to ask if he was sure the ball didn’t cross the line as it bounced down.

MORE: Video: Cristiano Ronaldo hits another ridiculous milestone after firing Juventus into lead vs AS Roma 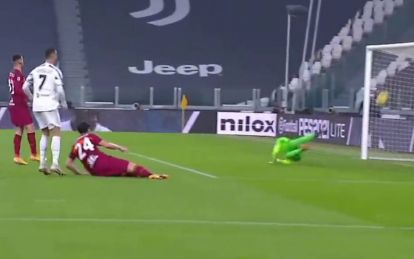 The match official cited the watch on his wrist, which is linked to the goal line technology in use across top-level football nowadays.

Ronaldo wasn’t prepared to take the referee’s word for it, though. Rather cheekily, he leaned across as if to have a look at the watch himself, making absolutely sure that he wasn’t being robbed of a second goal.

Say what you like about Ronaldo – his hunger for goals is unrivalled.

Cristiano Ronaldo didn’t believe the referee when he said his shot didn’t go over the line ? pic.twitter.com/1KWDeJK3yF