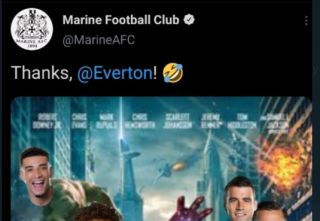 We’ve all seen numerous examples of clubs having a bit of fun to get attention on Twitter, but it appears that fun cannot be had at your expense if you’ve helped to raise money for a smaller team at some point recently.

Marine played Spurs in the earlier rounds of the FA Cup this year and some of the fans helped to raise funds by buying virtual tickets to the game – something we can all agree is a great thing.

Unfortunately that relationship seems to have soured after Marine recently posted this on their Twitter congratulating Everton on winning last night, and it appears that Spurs fans moaned so much that they were then forced to take it down:

Perhaps it was a bit disrespectful or ungrateful from the non-league side but they were also just showing some appreciation to their neighbours, so it is a bit pathetic from the fans who have been affected by such a small club doing something that doesn’t back their big team.