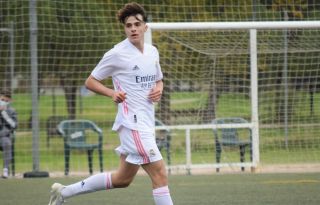 Manchester City and Arsenal are reportedly preparing to try and prize talented teenager Bruno Iglesias from Real Madrid once his contract expires in 2023.

Since arriving in the Spanish capital, the highly-rated prospect has managed to climb his way through his side’s under-17s and under-19s and is now on the verge of representing the Castilla.

The Spanish teenager who operates as a central midfielder is widely regarded as one the country’s most talented prospects.

However, according to a recent report from Real Madrid focused outlet Defensa Central the youngster’s development is catching the eye of some of the Premier League’s biggest clubs.

The outlet claim that Manchester City and Arsenal are two clubs who have been tracking Iglesias for quite some time now.

With the midfielder’s contract set to expire in 2023, it has been claimed that although Real Madrid will do all they can to see their future star renew his deal, Arsenal and Man City could take advantage of the situation in future windows.

It has also been suggested that should Iglesias impress after making the step-up to Los Blancos’ Castilla side then he may not be far off Zinedine Zidane’s first-team plans.

Should Iglesias emerge as a first-team player within the next 12-months, still at the tender age of just 17 or 18, it goes without saying, the youngster’s value will rocket.