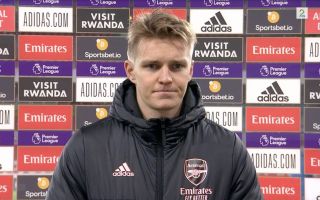 While speaking to Norwegian channel TV 2, Martin Odegaard was quizzed on whether he will return to Real Madrid when his Arsenal loan expires.

Odegaard signed for Arsenal on loan for the remainder of the season in January. He had a successful stint with Real Sociedad last campaign, which convinced Zinedine Zidane to keep him around in Madrid. However, such is the competition for places in that area of the field with Los Blancos, he found his game time limited.

A loan was absolutely necessary for Odegaard, with the midfielder finally showing signs of fulfilling the potential he showed as a youngster, which led to Real Madrid signing him in the first place. Arsenal showed interest in the 22-year-old and signed him for an initial six-months, an unusually short-term move for a ‘Big Six’ club.

Is this part of Mikel Arteta’s plan to sign him on a permanent basis, though? Is he looking to convince Odegaard of what Arsenal could offer him, which even at this early stage looks more promising than sitting among the substitutes at Real Madrid?

Only Arteta and Edu will be able to tell you that, but Odegaard was quizzed on this very topic while speaking to TV 2 after his first Premier League start, which came in the Gunner’s 4-2 victory over Newcastle. Speaking to TV 2, Odegaard said:

“You never know what is going to happen, but for now I am just focusing on doing my best this season and helping the team as much as possible.”

It’s nothing conclusive, but it certainly leaves the door open…