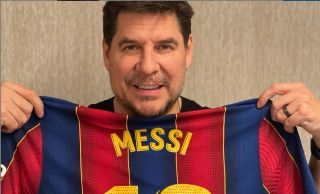 Although there is a general feeling that Lionel Messi could move on from Barcelona this summer, it’s still not actually clear what his intentions are at this point.

It’s possible that he wants to see who takes over as the new President in case that signals a major turnaround at the Nou Camp, but it really does look like he could go on to play for someone else in Europe.

Because of his financial demands it’s very possible that PSG and Man City are the only teams with the resources to take him on just now, but there’s also a feeling that he could head over to play in MLS at some point too.

It still feels like he has at least two more years at the highest level so he might not want to make that move just now, but one of the owners of Inter Miami has made a huge claim on his Instagram:

He was sent a signed shirt from Messi which he’s clearly delighted about, but he goes on to suggest that football is such a small world and he’s sure that their paths will cross very soon.

Could it be an early hint that he’s heady to MLS in the summer? We won’t have to wait too long to find out…