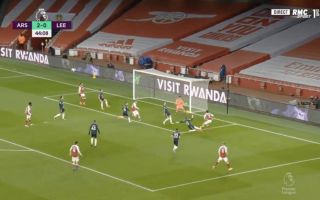 Leeds United are falling apart at the Emirates. Hector Bellerin has added a third for Arsenal on the stroke of half-time.

Arsenal led by two after a brace from Pierre-Emerick Aubameyang. Leeds faced an uphill task to get back into the contest as it was, any hopes of a revival have now surely been crushed by a third from the Gunners.

After a cute nutmeg pass from Dani Ceballos, Hector Bellerin squared up his opposing defender before shifting the ball onto his right foot and firing low and hard in the direction of Leeds’ 20-year-old goalkeeper, who was beaten at his near post.

It was Bellerin’s first goal at the Emirates for two years, and even with Leeds’ track record of producing the extraordinary, you get the feeling that this one signs and seals a much-needed victory for Arsenal, who have tailed off a little after being in a good run of form.