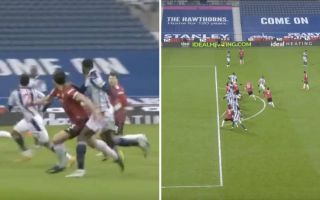 Should Manchester United have been awarded a penalty against West Brom this afternoon? Referee Craig Pawson, via a VAR review, didn’t think so.

Harry Maguire hit the deck after a coming together in the penalty area with Semi Ajayi, with Pawson taking a moment to gather his thoughts before pointing to the spot.

However, the match official was sent to the VAR monitor to take another look at the incident, and after seeing the incident several times over, he decided against giving the penalty.

Craig Pawson consults the monitor and decides that Ajayi hasn’t made sufficient contact for Maguire to go to ground. No penalty.

As was flagged in commentary, VAR did not even check if Harry Maguire was onside when he made the run, which was bizarre, considering the ‘foul’ would have been irrelevant if he was adjudged to be off.

He’s spent all that time reviewing that decision and he was offside anyway. ?????

These officials are pathetic. pic.twitter.com/zeXlivKecD

They look to have got this one right, with the contact on Maguire pretty minimal, but if they’re not going to check tight offside calls like that in situations of this nature, they’re going to end up making mistakes…