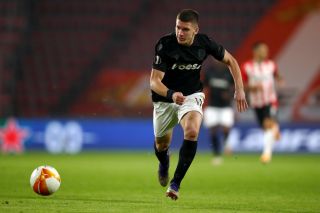 Tzolis, 19, is highly-rated among clubs in Europe and with four senior caps already to his name, the youngster’s hype shows no signs of slowing down.

It has been the teenager’s impressive breakthrough which has reportedly caught the attentions of some of Europe’s biggest clubs, including Ole Gunnar Solskjaer’s Red Devils.

According to a recent report from Sportime (via Sports Witness), in addition to United’s interest is also Bundesliga side Borussia Dortmund.

It has been claimed that the exciting winger, who primarily operates on the left-flank but can also fill-in as a striker, is on several top club’s transfer shortlists.

The outlet claim United have been scouting the youngster as they look to continue their impressive youth recruitment.

United’s recent investment in young players has not gone unnoticed with the likes of Amad Diallo and Facundo Pellistri both recently making the switch to Old Trafford.

It is not yet known exactly how much Tzolis is valued at, however, it has been speculated that a fee within the region £17m would be enough to seal the deal.

If these reports coming out of Greece are anything to go, another name who could arrive at Carrington in the coming months is attacker Tzolis.