Former Manchester United midfielder Luke Chadwick has called on his old club to sign more leaders after their 1-1 draw away to West Brom at the weekend.

The 40-year-old is concerned about Victor Lindelof in particular, whilst also pointing out once again how concerning it is that Man Utd keep starting games so slowly this season.

The Red Devils have got away with it in some games, coming from 2-0 down to beat Southampton 3-2, and also scoring three late goals to come from behind in a 3-1 win over West Ham.

MORE: Former Man United star names “top player” who could be an ideal signing for the Red Devils

Still, they keep on getting caught out early on, and it cost them against West Brom at the weekend, with Chadwick saying Lindelof needed to be stronger on the opening goal, even if there were some question marks over a possible foul.

When asked if these slow starts are down to the manager or the players, Chadwick urged the players to step up and suggested more signings like Bruno Fernandes are needed at Old Trafford.

“It’s hard to blame the manager for that. Once you cross the white line onto the pitch it’s hard for him to control what happens,” Chadwick told CaughtOffside.

“It is strange how often that has happened, that there have been so many slow starts made throughout the whole season. It certainly cost them dearly yesterday – once the early goal was scored, West Brom sat so deep and made it so hard for United to break them down.

“It was a hugely disappointing result considering what happened with Manchester City and Leicester winning at the weekend. The title dream is more or less over now and it’s something that needs addressing.

“I don’t know how much work you can do on training on the slow starts, it does seem to be a mentality thing. It seems like the team has to concede a goal because they can really get going in a game.”

On Lindelof’s defending, he said: “I think as a centre half, you need to be stronger in that situation. The lad up front for West Brom was a real handful all game, but I’m pretty sure it did look like a foul, his hand was in Lindelof’s face.

“It’s one of those where United have been guilty most of the season of being slow to get out, they were so deep from the cross. If Lindelof and Maguire can push up a little bit as soon as the ball moves back it makes it so much harder for West Brom to score a goal. The back four do seem to be a bit static when the ball moves into those tight areas.

“I’m sure Man United will have recognised that they lack that character a little bit. Obviously Bruno Fernandes is a huge part of that, gets the team going, gets them out of a hole. He wasn’t having the best game yesterday but his incredible finish got the team level. 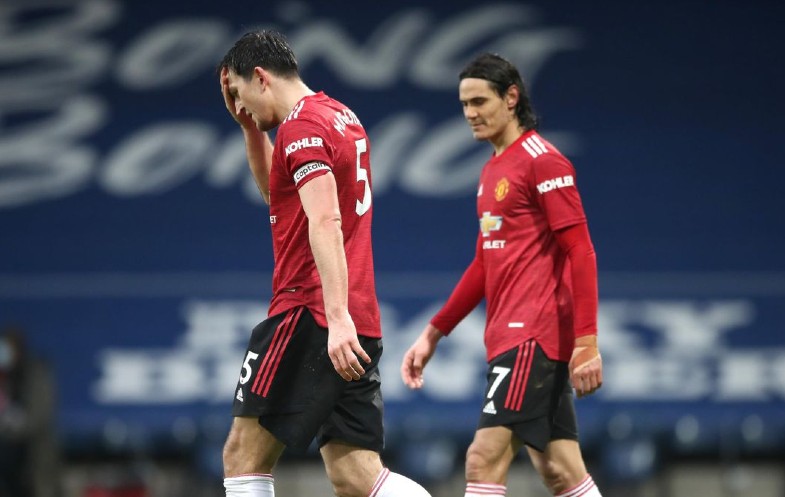 Do Manchester United lack leaders in their current squad?

“I think Maguire is sort of taking more of a leadership role, both on and off the pitch. He spoke really honestly after the game, and took a lot of responsibility on the ball yesterday. West Brom were dropping really deep and it was him taking the game to West Brom at times, coming forward with the ball.

“Cavani is obviously a leader, a character, but it’s probably hard that he doesn’t speak much English. They’ve got a talented bunch of young players yet to hit their full potential and I think having more leaders and more experienced players in the squad will help bring those younger players forward.

“I think they’ll be looking to bring in some leaders, people who have that big character to help that group and stop that problem with starting games so slowly. I’m not sure one player can do that but it’s something that needs to change quickly. They’ve got away with it at times this season, but a draw at West Brom’s not going to be enough to put them in a position to win league championships.”