The estranged wife of Manchester City star Riyad Mahrez, Rita Johal has reportedly signed up to controversial app ‘OnlyFans’ and is supplying punters with ‘exclusive content’ for just £8-per month.

The pair, who were married for six-years but separated last year, have two children together and shot to the limelight following Mahrez’s rise to footballing prominence.

Johal, who has over half-a-million Instagram followers has issued a plea, asking her followers to join her on the x-rated app ‘OnlyFans’.

The former WAG is understood to be dishing out what she describes as ‘exclusive content’ from just £8-per month. 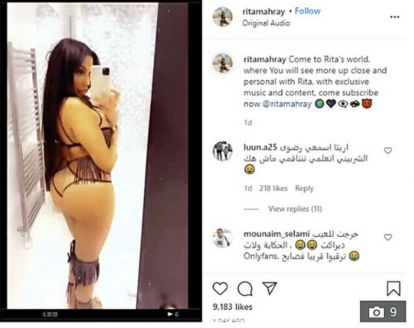 The wife of the Man City winger has recently hit headlines following a breach in COVID-19 rules which led to her being fined, as per The Mirror.

She later claimed she had only received the fine because she was ‘too attractive’.

Despite being married since 2015, Mahrez and Johal are rumoured to currently be going through the divorce process, with the former WAG expected to pocketed a large chunk of the winger’s wealth.