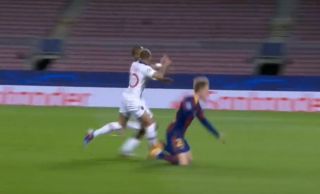 Sometimes we see a decision which even VAR will struggle to clear up, and this looks like one of those for Barcelona this evening.

Frenkie de Jong is away from his man and it looks like his legs are clipped, so the ref points to the spot and VAR doesn’t see anything to overturn it.

One angle did suggest there was no contact and Glen Hoddle was quick to make that point on the BT Sport commentary, but it didn’t matter to Lionel Messi as he slammed the ball home:

Messi from the penalty spot!

Barcelona lead at the Camp Nou thanks to Messi’s converted penalty.