Every player will have one of those games where they just cannot do anything to stop an opposing player, but the most important thing is how they bounce back.

There will be much better players than Sergino Dest who get roasted by Kylian Mbappe over the next few years, but you could see the Barca man’s confidence was utterly shot as the game went on last week.

That panic even spread to Gerard Pique at one point as he was caught desperately yelling instructions at him which didn’t work, but it’s natural that questions may be asked about Dest’s suitability at the highest level just now.

He was signed from Ajax with fairly limited first team experience so he was always going to be a bit raw, while it’s become clear that his strengths lie in pushing forward rather than marking someone out of the game.

It really must be stressed that he was offered little to no protection by Ousmane Dembele on the flank so he was exposed against one of the best players in the world, so it’s not a surprise that Sport have reported that Barca plan to stand by their man.

It’s been suggested that he was carrying an injury but that may just be an effort to save some face, but his positioning was the main issue as he just dropped deeper and deeper to prevent Mbappe getting past him but that just allowed him to cut inside.

It’s one of those performances that he will learn from and hopefully he takes the lessons from it and becomes a better player, while you have to hope he’s given some help in the return leg if he starts again. 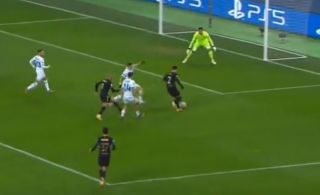