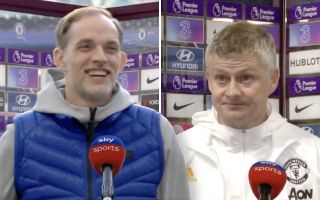 Chelsea have taken a sly dig at Manchester United manager Ole Gunnar Solskjaer via the club’s Twitter account after the Red Devils boss’ comments in his post-match Sky Sports interview.

Speaking in wake of what was a frustrating afternoon for United, during which their hopes of catching rivals Man City and winning the Premier League title were reduced to essentially zero, Solskjaer vented his frustration at a “cheeky” comment written on the Chelsea website about Harry Maguire’s past crimes.

? “I can’t say (what the referee said to Maguire), that’s not going to be good for him.”
? “That’s cheeky what they put on their website.”

Ole Gunnar Solskjaer is not happy about what he’s called ‘outside influences’ putting pressure on referees when it comes to #MUFC. pic.twitter.com/MHY8CgcSIR

Solskjaer insinuated that it was an attempt from Chelsea to influence the match officials for today’s game, which is quite the conspiracy theory, and one with very little base to it, it has to be said.

Chelsea have once again risked the wrath of the Man United boss with this equally “cheeky” tweet they posted to plug their match report after the stalemate at Stamford Bridge.

? Read all about today’s game on the Chelsea website…#CHEMUN