Ole Gunnar Solskjaer eluded to something that was posted on Chelsea’s website pre-match during his interview with Sky Sports. If you’re not up to speed, here’s what he’s talking about.

Solskjaer, speaking to Sky Sports’ Geoff Shreeves after the full-time whistle, suggested that Chelsea had been “cheeky” in attempting to influence today’s match officials with something they had written pre-match about Manchester United captain Harry Maguire.

? “I can’t say (what the referee said to Maguire), that’s not going to be good for him.”
? “That’s cheeky what they put on their website.”

Ole Gunnar Solskjaer is not happy about what he’s called ‘outside influences’ putting pressure on referees when it comes to #MUFC. pic.twitter.com/MHY8CgcSIR

While it was not clear exactly what he was referring to for those who hadn’t been scrolling through Chelsea’s pre-match briefing on the club’s official website, Solskjaer appears to be talking about this paragraph below, where the Blues refer to two cases of Maguire foul play which had gone unpunished during game’s against them. 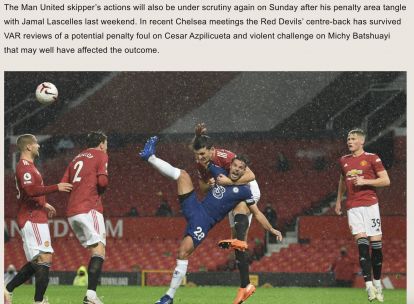 Whether it was an attempt from Chelsea to directly influence the match officials for today’s game is unclear, but Maguire ensured there were no contentious moments which he could have been punished for.

There’s no doubt, though, that as Solskjaer says, it’s “cheeky” from the Blues…