Former Manchester United midfielder Luke Chadwick has identified the kind of signing the club needs at the moment after a disappointing 0-0 draw with Chelsea yesterday.

The Red Devils once again lacked spark up front in a big game, which is quite a change from last season when they often seemed to turn up well against stronger opponents, whilst struggling for consistency against the so-called lesser sides.

Chadwick admits the lack of goals against big six sides is a concern for his old club, and has suggested Ole Gunnar Solskjaer is lacking the kind of attacking player who can provide them with a moment of magic to decide matches like this. 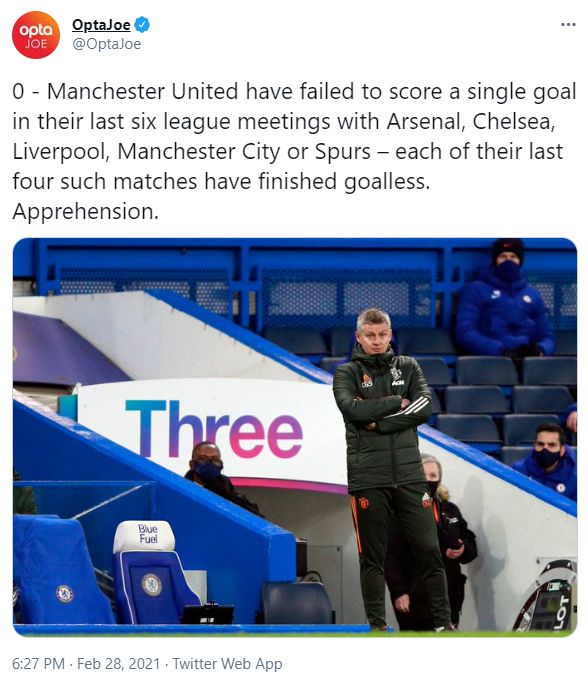 United lined up with Marcus Rashford, Mason Greenwood and Daniel James up front yesterday, but none of them were that convincing, while in-form star Bruno Fernandes also had a bit of an off-day.

That attacking trio worked well in the recent 4-0 win over Real Sociedad in the Europa League, but Chadwick felt this was a step up for them, and perhaps Dan James in particular.

“It seems to be quite a switch from what the situation was last season where Manchester United seemed to perform much better against the bigger clubs and had their struggles to put away the smaller clubs,” Chadwick told CaughtOffside.

“They seem to have sorted that issue out this season, but then it’s been quite uninspiring against the bigger clubs, thinking back to the Arsenal game, the Liverpool game. The team seems to be set up not to lose the game rather than go out and win the game.

“Having said that, they started well against Chelsea, pressing high, but they then dropped their full-backs a bit and looked to hit them on the counter attack. Maybe last season they weren’t taken as seriously. I remember last season at the Etihad United looked devastating on the break, but now teams have sort of sussed them out a bit and it seems harder for the team to break their opposition down, especially when their top players aren’t at their creative best. There seems to be a struggle to create clear-cut chances.

“It’s a step up in terms of the quality of opposition, no disrespect to Real Sociedad, but Chelsea have got world class players and United struggled to break them down.

“I do think there’s been an improvement in Greenwood, he looked more like the player we saw last season. Dan James – I think he is a really good squad player for Manchester United and deserved to start yesterday after his recent performances, but we could’ve done with a higher class player in that position who can decide big games against the likes of Liverpool, Chelsea and Arsenal, games where you need that little bit extra. He’s an effective player coming from the bench and did fine yesterday, but couldn’t quite create that moment of genius that a top, top player could.

“I think Greenwood could be that player in years to come. Rashford wasn’t at his best, Bruno was a bit disappointing so it looks like they need an extra player there to help them win these games.”