According to journalist Ian McGarry, who hosts the Transfer Window Podcast alongside reporter Duncan Castles, Arsenal have made a ‘solid enquiry’ to Celtic regarding striker Odsonne Edouard.

McGarry reports that Edouard is valued at around €25m by the Scottish giants who have endured a dismal season, missing out on the chance of 10 straight titles to a rejuvenated Rangers side.

It’s added that Arsenal enquired about Edouard with the view to a potential transfer this summer. The 23-year-old has been phenomenal since joining the Hoops in 2017 on an initial loan deal from PSG.

McGarry also reiterated that Celtic are historically a ‘selling club’, with the Parkhead outfit looking to sell up to three players this summer to ‘raise funds’, Edouard is seen as their ‘most valuable asset’.

Duncan Castles later added that there’s no current indication that Edouard’s contract, which expires next summer, includes an extension option, so Celtic may be lucky to see their €25m demands met. 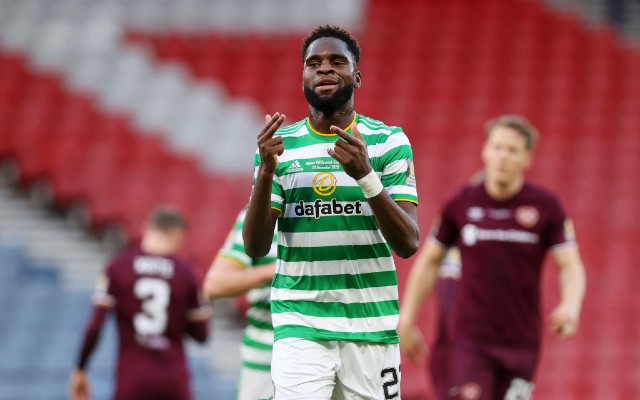 Odsonne Edouard is clearly ready for a step up.

Here is what McGarry had to say when introducing Arsenal’s interest in Edouard:

“Someone who is available for around €25m, it’s also our information that Arsenal are a club who have made a solid enquiry with regards to a transfer in this next window (summer).”

Edouard has returned 81 goals and 35 assists in 160 appearances for Celtic, it’s clear that last season’s Scottish Premiership top scorer is simply far too good for this level, with all respect.

Castles and McGarry also hinted that Arsenal may be in need of a striker this summer as Alexandre Lacazette could be sold, as he enters the final year of his contract with no concrete hints at a new deal.

Edouard will need to leave Scotland for one of Europe’s top leagues if he wishes to break into the France squad in the near future as well, to be a bonafide star he needs to showcase his ability against respectfully much more difficult opposition in a more competitive division.