Some Premier League fans noticed a hilarious moment before Arsenal kicked off in their Premier League clash against Burnley this afternoon, with Joe Cole providing something memorable…

Top-flight and England legend Joe Cole was on analyst duties for BT Sport today, with the former attacking midfielder breaking down some of the Gunners’ play in the solid win against Leicester.

Cole then produced a moment to forget as he butchered the pronunciation of Arsenal star Kieran Tierney’s surname, making it sound more like ‘Teaaaaaa Earnie’.

Joe Cole pronouncing Tierney is nothing short of shambolic ?????? pic.twitter.com/1wrdnioMtA

You’ve got to give Cole his dues for attempting to pronounce the star’s name in its natural Scottish way, even if the attempt went sideways. 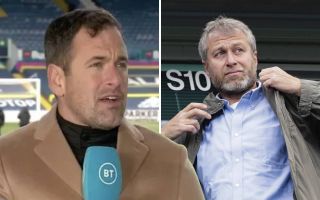