Chelsea host Everton at Stamford Bridge this evening knowing that a victory would strengthen their grip on fourth place.

The Blues have endured a rollercoaster campaign to date, one which cost Frank Lampard his job.

However, the victory over Liverpool at Anfield, and the dominant manner of it, was the perfect way for the Blues to showcase how far they’ve come under Thomas Tuchel’s stewardship.

Chelsea take to the turf this evening against Champions League challenging Everton, and this is the starting XI that Tuchel has fielded in his bid to get three more points on the board tonight.

The name that stands out there is Kai Havertz, with the German making his first start for Chelsea since Thomas Tuchel’s very first game in charge against Wolverhampton Wanderers. 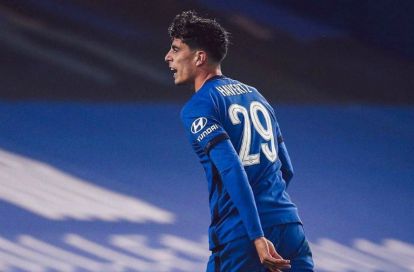 Kai Havertz in action for Chelsea earlier in the campaign.

Tuchel will be well accustomed with Havertz’s strengths, and his weaknesses, with Chelsea fans no doubt excited to see how far the club’s record signing can go under his management.

Havertz is starting I’ve never been happier in my life pic.twitter.com/pgBpIZbI6o