Henderson had a quite brilliant campaign on loan with Sheffield United last time around, before returning to Old Trafford to compete with de Gea for the number one spot.

MORE: Former Man Utd ace explains what Mourinho got wrong with “arguably the club’s player of the season so far”

The Spaniard has occupied that role all season, with Henderson being limited to cup appearances and deputising when de Gea is unavailable – but could this be the time where he really stakes his claim?

Yesterday’s clean sheet at the Etihad was the second consecutive shut-out achieved by Henderson in the Premier League, and this stat provided by @StatmanDave is a pretty clear indication of where Man United could be better off with him, with de Gea instead being relegated to the bench. 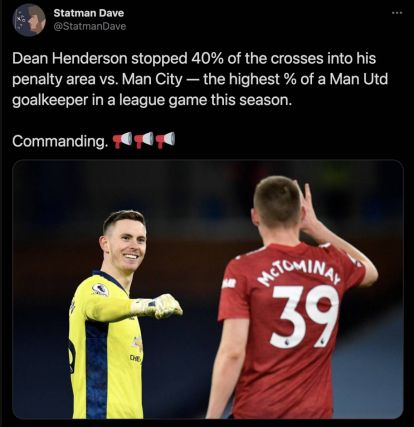 de Gea has been a brilliant servant to Man United for the bulk of his time since signing from Atletico Madrid, but it could be time for Ole Gunnar Solskjaer to look to the future. Henderson, from United’s perspective, is the future.