According to Don Balon, Barcelona icon Lionel Messi has already bought a house in Paris ahead of a summer switch to PSG.

It’s the worst kept secret in football that Messi’s contract with Barcelona ends in the summer.

MORE: Barcelona on red alert as Neymar signifies his intent to ensure a reunion with Messi

As you’d expect, when arguably the greatest player of all-time could be available on a free transfer, it gets people talking.

As reported by Don Balon, Manchester City and Paris Saint-Germain are two clubs who have been mentioned as potential destinations for Messi.

Unsurprisingly, too. There’s a short list of clubs who can realistically afford to sign Messi, and they’re both on it.

However, Don Balon’s report claims that Messi is to snub a move to the Premier League in favour of moving to Paris, where he has already bought a house. 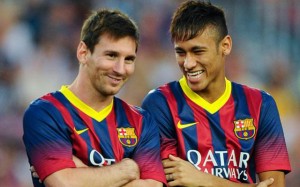 Could Lionel Messi and Neymar be set to reunite in Paris?

Joan Laporta has only just been elected as Barcelona president, so you imagine he hasn’t had a chance to sit down and talk with Messi just yet.

Until he has, it’s difficult to imagine the Argentine making a definitive decision on his future.

Though, there’s nothing stopping him from expanding his property portfolio…