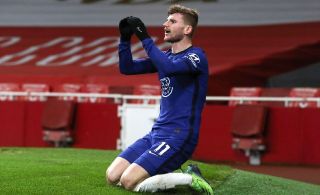 Chelsea manager Thomas Tuchel was clearly not amused as Timo Werner seemed to be playing in the wrong position for about 15 minutes against Everton.

See below as Tuchel can be heard yelling asking if Werner knows what he’s doing, telling him he’s meant to be on the right, not on the left…

Only good thing about empty stadiums is hearing what managers say & Tuchel was having none of Werner:

Chelsea ended up winning anyway, but this clip sums up Werner’s continued struggles at Stamford Bridge.

The Germany international has not got going at all at Chelsea, and hasn’t improved as many hoped he would since Tuchel replaced Frank Lampard as manager.