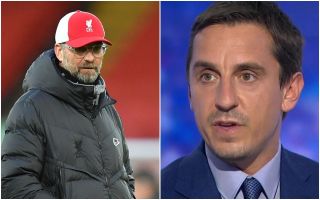 The former Red Devils star won plenty of major honours during his playing career and knows that the occasional blip is inevitable, but he’s stunned by quite how dramatic Liverpool’s collapse this season has been.

The Reds have been absolutely awful in recent weeks, losing a staggering six home league games in a row.

MORE: Haaland or Mbappe to Liverpool?

Despite running away with the title last season, Liverpool now face a struggle to even get into the top four as their form goes off a cliff.

Neville has been taken aback by this rapid deterioration, and explained just how bad he thinks things are at Anfield right now in his podcast with Sky Sports.

“When I say that, I mean really bad in sight of how good they’ve been. We all like different styles of football and for me, if you said put Manchester City over the last three years against Liverpool, I’m taking Liverpool all day long.”

He added: “This Man City team is a fantastic team, don’t get me wrong, and it pains me to say that they are both the biggest rivals for Manchester United.

“Liverpool have been absolutely outstanding and reached unbelievable heights and I said a few weeks ago on this podcast that it was acceptable that they would have a little bit of a dip and I would go easy on them.

“We could never do it in the fourth year at Man Utd, there was always that dip, but this isn’t a dip – this is a collapse. They’re woeful at the moment in every single way.

“What’s happening at the moment is bizarre… and it feels like they’ve lost absolutely everything that they had. Their speed of play, their confidence, the way in which Anfield was such a difficult place to go, the determination, the resilience to win when they weren’t playing well – there isn’t anything there at the moment.

“I don’t how they get that back other than to get to the end of the season. They’re going to struggle to get into the top four – they still could but they’re really going to struggle – because the mood in the dressing room at the moment must be really low.

“The confidence must be drained out of them and I have no answer. It goes beyond what would be a fourth year dip, this is a real collapse.”

Liverpool will surely need a major rebuild this summer as Jurgen Klopp has perhaps taken this group of players as far as he can.