West Ham midfielder Declan Rice has revealed he was “battered” by manager David Moyes for giving up a first-half penalty to Jesse Lingard in last night’s win over Leeds.

Rice had taken and converted West Ham’s previous penalty, which was the first they had been awarded in the Premier League this campaign to date. The Hammers proved that penalties really are just like buses after Manchester United loanee Lingard won one against Leeds last night, making it two in quick succession.

Lingard stepped up to take the spot-kick, brushing Rice aside in the process, and missed, with his poor effort being saved by the goalkeeper. Thankfully for the on-loan midfielder, the ball was parried back out into his path, with Lingard making no mistake on the second attempt and getting his goal. 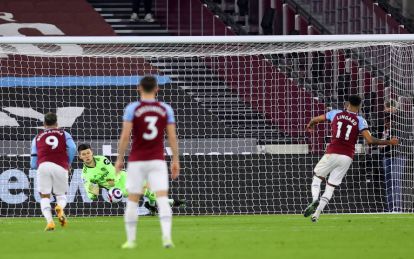 Jesse Lingard fluffed his lines from the spot against Leeds United on MNF. 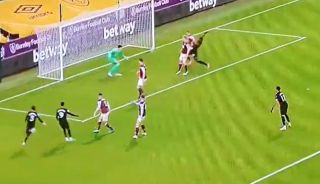 All’s well that ends well, right? Not in Moyes’ eyes, clearly, as speaking to Sky Sports in wake of the contest, Declan Rice revealed that he had actually been “battered” by his manager after allowing Lingard to take the penalty in his place. Rice said:

“The gaffer has just battered me in there. But me and Jess spoke, we’ve been practicing in training together and he said ‘can I take it?'”

“I’m not one to be selfish, there was a bit of controversy with the last penalty, and I was confident in him to go and take the ball.

“If he had missed that there would have been a bit of backlash on me, but I was confident in Jesse’s ability to put the ball away.”

West Ham’s Declan Rice did not feel they were at their best in their 2-0 win over Leeds but are learning to win ugly ? pic.twitter.com/R1NJHg1pzZ