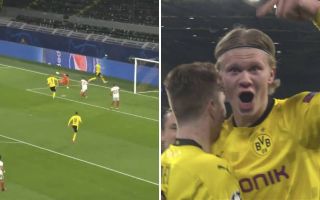 Erling Haaland is just silly really, isn’t he? The Borussia Dortmund striker has opened the scoring against Sevilla in the Champions League this evening.

Dortmund headed into tonight’s second-leg clash with Sevilla with a one goal advantage from the game in Spain. Of course, it was Haaland’s brace that made the difference on that night, and the Norwegian superstar in the making is intent to make his mark on tonight’s game, too.

Much of the credit for this goal has to go to Marco Reus, who had the awareness to pull the ball back for Haaland, who had a tap-in, but how many times has the 20-year-old scored for Dortmund having found himself in these pockets of space in the penalty area?

“Marco Reus sets it up and you know who does the rest!”

Erling Haaland strikes again for Dortmund in the #UCL, putting his side 1-0 up vs. Sevilla! ?

He can’t be stopped! ? pic.twitter.com/YJoPz1aYO9

There is an obvious comparison to be made between him and Robert Lewandowski, because no other striker on the planet is comparable to Haaland in terms of sniffing out goal-scoring opportunities. The only difference being, Lewandowski is 32 years his senior…