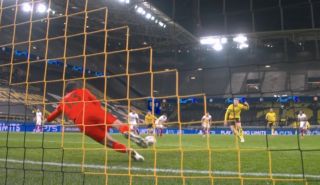 VAR is once again at the epicentre of madness, but this time in Borussia Dortmund’s second-leg Champions League tie against Sevilla.

Where to even begin with this one…

Just minutes after the game’s second-half kicked-off, in-form striker Erling Haaland carved out and finished off a simply superb move to gift his side a 2-0 lead.

However, upon an inspection on VAR’s pitchside monitor, the referee deemed Haaland to have shoulder badged his opponent, thus, ruling his brilliant effort out.

However, weirdly, the game’s officials then proceeded to look at an incident, also involving Haaland, which occurred over a minute earlier.

A penalty was given which Haaland stepped up to take. The Norweigan missed the first spot-kick but a re-take was quickly awarded due to keeper Yassine Bounou coming way off his line.