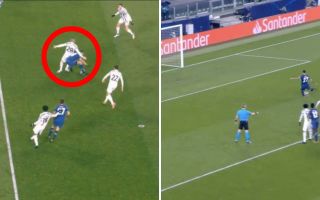 Cristiano Ronaldo and Juventus are in real danger of crashing out of the Champions League after Porto got the first goal of the night in Turin.

Juve headed into tonight’s game down a goal, having lost 2-1 in Portugal. Porto finished second in the group stage, with Manchester City progressing top of the pile, and as a result were handed a difficult knockout round draw.

It’s not proving to be of any great difficulty for them thus far, though, as by scoring first away from home tonight, they’ve left the Italian champions in need of two goals just to take it to extra-time.

Merih Demiral’s naivety gifted Porto a golden chance to stretch their aggregate lead, and it was an opportunity Sergio Oliviera grabbed with both hands, firing into the back of the net, leaving Juve and Ronaldo in jeopardy.

Ronaldo’s up against it, but history shows that can often prompt him to play some of his best football…