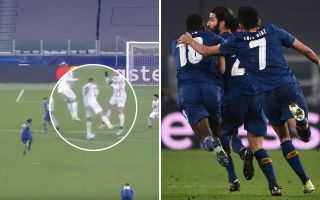 Porto have done it! They’ve got the late goal in Turin to take them through to the Champions League quarter-finals, and Cristiano Ronaldo won’t want to see this again.

We’ve seen countless clutch moments from Ronaldo in the Champions League. The forward is arguably the greatest player in the history of the competition. However, he’s had an almighty moment to forget here, with Porto taking advantage and scoring the goal that eventually led to Juventus’ exit from the competition.

MORE: Video: Federico Chiesa puts Juventus ahead on the night with fine header to push Porto back against the ropes

Sergio Oliviera has got his name on the scoresheet for the second time this evening from the free-kick, but in truth, he’s had a huge helping hand from international teammate Cristiano Ronaldo, who uncharacteristically turned away from the strike while taking up the central position in the wall, negating any attempt at blocking the shot.

Ronaldo is hardly the sole person to blame here, but for a player and a man of his standards, this is pretty shocking…

THIS IS TRULY INCREDIBLE!!!!

Sérgio Oliveira scores for 10-man Porto and the visitors are on the brink of going through!