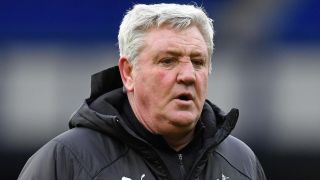 Liam Kennedy has provided an intriguing update on Steve Bruce’s position as manager at Newcastle United.

It’s been a difficult season at St James’ Park, and many fans will now surely be calling for Bruce to be shown the door as soon as possible.

Newcastle writer Kennedy, however, has suggested this is a big decision that the club’s board are currently not prepared to take.

“Steve Bruce’s sacking is the decision they do not want to take; they played their cards six weeks ago when they brought in Graeme Jones,” he said.

“They believed, with the point gap, that that would be enough, just enough to see Newcastle United home; always the same – just doing enough. It hasn’t been, it doesn’t look like it’s going to be, and that decision is looming large again.

“My information is it’s the decision that that football club does not want to have to make.

“It would cost them a fair bit of money [to sack Bruce]; we’ve seen the reports this week. I don’t know for a fact what the compensation is – nobody will – but it doesn’t sound good with the region that people are talking about.”