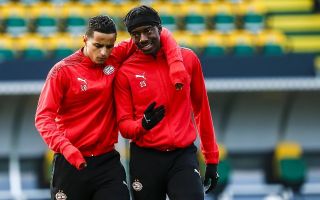 Arsenal have reportedly been holding talks over a potential transfer deal for PSV midfielder Mohamed Ihattaren.

And according to Spanish outlet Todo Fichajes, it is expected that the Gunners will make a formal offer for the highly-rated 19-year-old soon.

Ihattaren looks a real prospect after rising into the PSV first-team after coming up through their academy.

It could now be that his fine form in the Eredivisie earns him a big move, with Arsenal unsurprisingly seeming to be in the market for a new midfielder of this type.

It’s been a difficult season at the Emirates Stadium, and it seems clear that manager Mikel Arteta needs to rebuild this struggling squad, with fresh blood like Ihattaren ideal to give them more long-term hopes of success.

Mohamed Ihattaren in action for PSV

The teenager surely has a big future in the game and already looks like he could be an upgrade on some unconvincing performers in Arsenal’s midfield, where the likes of Granit Xhaka, Mohamed Elneny and Dani Ceballos haven’t really done enough in recent times.