West Ham have finally slipped out of the top four, but they do have a game in hand and they should still fancy their chances on Sunday as they head to Old Trafford.

Naturally we tend to expect Man United to win their home games, but they’ll be tired after a Europa League clash with AC Milan and Solskjaer’s team have been maddingly inconsistent this season.

You could also see in the FA Cup clash earlier this year that there wasn’t much between the teams, and West Ham would probably have won the tie if they had someone to rely on up front.

A recent report has looked at the team news ahead of the game in Sunday, and it does look like Man United have a bit of an injury crisis to deal with.

It appears that Juan Mata, Edinson Cavani and Paul Pogba will definitely miss out through injury, David de Gea is on a leave of absence for personal reasons and there are doubts over Marcus Rashford and Donny van de Beek too.

There are some important players who won’t be playing there so that does weaken the team, while it also reduces the chances for rotation with the Europa League game so in theory David Moyes and his men will be up against a weakened and tired team. 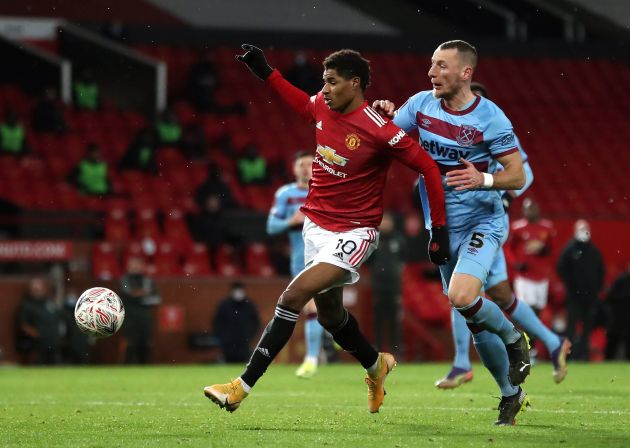 Marcus Rashford in action for Man United vs West Ham

There will still be danger with the likes of Anthony Martial and Mason Greenwood in attack but they have been inconsistent this year, so West Ham have a real chance of victory if they play well.