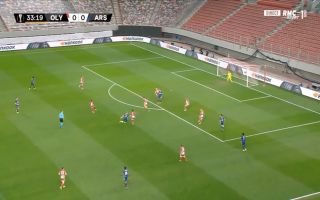 In the 33rd minute of tonight’s Europa League knockout tie between Arsenal and Olympiacos, intense pressing from Hector Bellerin and Bukayo Saka forced the Greek side to give the ball away.

As Olympiacos attempted to play out of the danger, Thomas Partey challenged a pass, knocking it towards the path of Martin Odegaard with a first-time effort.

Odegaard collected the ball and began to drive forward, the Real Madrid loanee then blasted an audacious strike towards goal from around 25 yards out, which soared into the roof of the net.

The attacking midfielder certainly made up for a glorious miss in just the second minute of the tie, although Olympiacos keeper Jose Sa perhaps could’ve done better here after some strange acrobatics.

See More: Video: Astonishing save of the season contender denies Aubameyang for Arsenal vs Olympiacos

Martin Odegaard, THAT is spectacular! ??

What a way to get his debut Arsenal goal… ? pic.twitter.com/OnX6exkHvp

Sa was left completely stunned by the Norwegian star’s effort, just like the rest of the Olympiacos team and many viewers at home.