As if Liverpool don’t have enough on their plate already.

Wading through treacle it seems in the Premier League, rumours continue to circulate regarding the potential next movements of their players.

MORE: Liverpool fans petrified because of THIS

One in particular has been playing hard ball for the entire campaign and refusing to sign a new contract, but that particular decision has appeared to come back and bite him.

Though Football Insider suggest that Barcelona have now offered Dutch midfielder, Gini Wijnaldum, a contract from the start of next season, Catalan outlet, Sport, refute the claims. 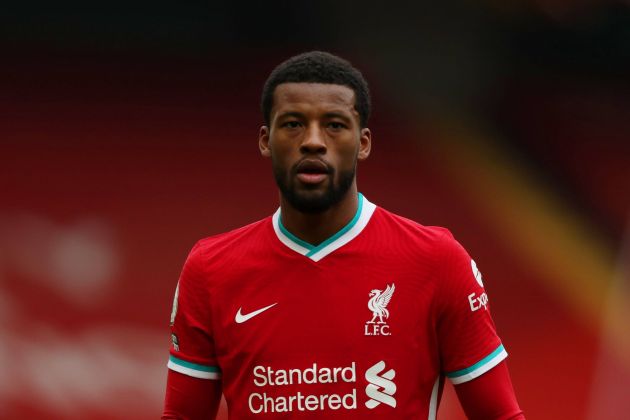 Gini Wijnaldum will have to renegotiate his contract with Liverpool

They cite the emergence of wonder kid, Ilaix Moriba, just 18 years of age, as the main reason why Ronald Koeman will not be following up any original interest.

Moriba has burst onto the scene with a goal and an assist, both involving Leo Messi, in his opening handful of games with Barca’s senior side.

Given that he already understands exactly how the team plays, has integrated seamlessly and has 12 years on Wijnaldum, there’s little chance of the latter doing anything other than renew his contract at Anfield now.