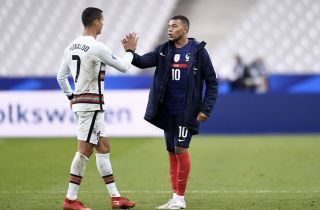 There aren’t many capable replacements in world football for French superstar Kylian Mbappe – But PSG have certainly identified one in Cristiano Ronaldo.

According to a recent report from Le Parisien, the Ligue 1 giants have highlighted Juventus’ Ronaldo as a possible ‘go-to’ should Mbappe’s time in the French capital come to an end.

It has been claimed that PSG’s president Nasser Al-Khelaifi has already contacted Ronaldo’s super-agent, Jorge Mendes, over a possible transfer.

With Juventus planning a clear-out and total rebuild ahead of next season, it is widely speculated that should an approach for Ronaldo be made, the Old Lady are unlikely to stand in his way.

Ronaldo is under contract in Turin until 2022 with Mbappe’s PSG deal set to expire at the same time.

Although losing one of world football’s biggest talents would be a huge blow for Mauricio Pochettino, a more than suitable replacement would be Ronaldo, even though he is 36-years-old.