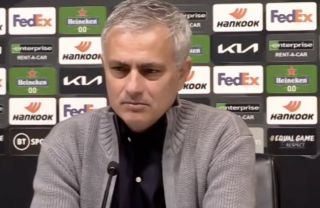 Although Spurs are only in seventh spot, it is Daniel Levy’s side who are currently enjoying a better run of form after taking nine points from their last three games.

Elsewhere, Arsenal, who are preparing to face-off against Spurs in Sunday’s exciting North London Derby, have won just one of their last three domestic fixtures.

Whilst speaking ahead of Sunday’s tense derby, Mourinho, when asked about the side’s contrasting league position, said: “I look up, I don’t look down.

“If Arsenal was seven points ahead of us, I would look to them.

“But because we have seven points more than them I don’t look down, I look up.”