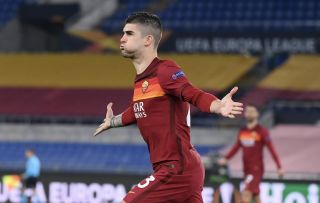 According to reports, Premier League duo Manchester United and Chelsea are both targeting AS Roma’s highly-rated defender Gianluca Mancini.

Mancini, 24, joined AS Roma in 2019 from Atalanta, initially on loan before making his switch permanent the following season in a deal worth just £11.7m.

READ MORE: Brazilian legend now living out of a hotel after cashing in his chips and selling his £1.2m mansion

Since his arrival in Rome, the commanding Italian defender has put in several key performances, with his latest coming during his side’s 3-0 dismantling over Shakhtar Donetsk in the Europa League.

In light of the defender’s impressive form, which has seen him contribute at both ends of the pitch, according to a recent report from Express, Mancini is attracting the interest of some of England’s biggest clubs.

It has been claimed that both United and Chelsea are keen on the 24-year-old ahead of a potential summer move.

Although AS Roma would prefer not to lose their talented defender – Express claim that due to lost revenue, the Italian side could cash in for just £27m.

Everton have been reported to have previously scouted the Italian defender, so whilst he’s performing well in Serie A, he clearly has several admirers in England’s top-flight, too.