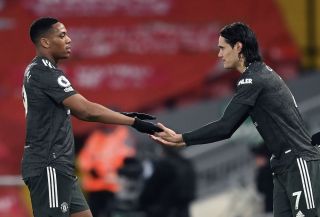 Since joining United on a free transfer last summer after his contract with PSG had expired earlier in the year, Cavani has featured in 18 Premier League matches.

Although his starts to goal ratio are reminiscent of ‘peak Cavani’, there is no doubting that the South American’s body is beginning to catch up with him.

Despite arriving at his new club last summer, Cavani has already missed 10 games through injury, something which the club’s decision-makers are rumored to be frustrated with, as per MEN.

The Uruguayan signed a one-year deal with the Red Devils, but both parties have the option to extend it by another year – Something which the club is now unsure of.

MEN’s report comes at a time when Cavani’s father admitted his son could leave Old Trafford in the summer (as relayed by Evening Standard).

Do you think Cavani should stay with United another year? – Let us know in the comments.