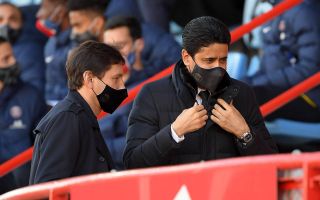 Paris Saint-Germain are leading the race to sign Raphael Varane from Real Madrid in the summer transfer window, according to Don Balon.

As reported by Transfermarkt, Varane’s contract with Los Blancos is due to expire in the summer of 2022. If the Frenchman is not willing to sign a new deal with the Spanish champions, Florentino Perez cannot afford to lose a player of that quality on a free.

As a result, selling him, if reluctantly, this summer could be the best option, especially considering the unfavourable financial climate.

Don Balon believe that PSG are prepared to offer a mammoth €80M for Varane, which would be a gigantic amount of money to receive in exchange for a player who has just one year left to run on his contract.

If that information proves to be true, and Mauricio Pochettino is keen on bringing Varane to the Parc des Princes, it leaves both Zinedine Zidane and Florentino Perez with a decision to make.

Do you take the money and run, or is there still hope of convincing Varane to commit his future to the club that gave him an opportunity in the big-time as a teenager?