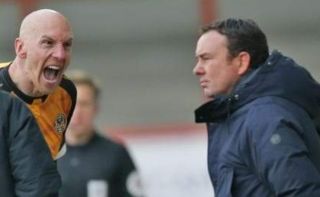 It’s expected that most players will do the apologetic celebration when they score against an old club and it’s pretty dull stuff, but this example this afternoon almost single-handedly makes up for it.

Kevin Ellison is still going strong for Newport County at the age of 42, and he came up against his former side Morecambe today.

It was a great afternoon for the striker as he scored the goal that clinched the victory, and he instantly took the chance to get right in the face of his old manager who forced him out the club:

Newport’s Kevin Ellison scores against former club and celebrates in the face of the manager that made him train on his own and didn’t ever put him on the team sheet, have that ya tw*t pic.twitter.com/2SfOn4K53N