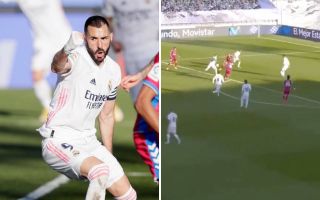 Real Madrid have done it. Karim Benzema has netted a late, late goal to bail Los Blancos out against Elche, keeping their title hopes alive.

Zinedine Zidane’s men looked down and out in the title race earlier in the campaign, with rivals Atletico threatening to take advantage of the decrease in quality across the traditional top two and assert their own dominancy.

Atleti have stumbled since the turn of the year, though, allowing Real Madrid and Barca a shot at grabbing the top spot. All they can do, to keep themselves on track to overthrow Atletico, is keep winning games.

Real Madrid fans must have been wondering if they were going to be able to do that this evening after Elche, with their one shot on target, opened the scoring in Madrid.

However, two goals from Benzema, including this late winner from the Frenchman, have ensured that all three points will be taken by the champions. What a big moment that could prove to be!

An outstanding half volley to win it in stoppage time for Real Madrid ? pic.twitter.com/cEC3ElO7in