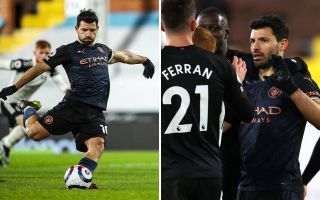 Aguero is one of the best, and most prolific, strikers in Premier League history. The Argentine gave us the most iconic moment the league has ever seen, as well as countless more for Man City.

However, with the striker nearing the end of his Man City contract, and suffering multiple injury setbacks, he was sidelined for a considerable period. City have been soldiering on without their star striker.

Aguero made his return to the City starting eleven against relegation battling Fulham this evening, and though it was from the penalty spot, he got back on the scoresheet for the league leaders.

This may well be one of the final goals Aguero scores in the Premier League, which would make it a considerable one. He’s one of the finest we’ve ever had, and we ought to appreciate him before he’s gone.

His first goal in 14 months in the Premier League ?