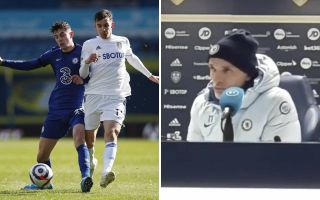 Chelsea are in dire need of a focal point in attack, with Timo Werner and Tammy Abraham falling short, but could Kai Havertz be the answer to their woes?

Havertz made his second consecutive appearance at the spearhead of Chelsea’s attack during their 0-0 draw with Leeds United in Saturday’s lunchtime kick-off.

MORE: The incredible stat that proves Chelsea were right to sack Frank Lampard

Though the German was unable to have the sort of influence that he did during the victory over Everton on Monday night, his inclusion in that role for a second game in a row suggested that he could be ever-present in that area of the field during the business end of the season.

Testament to the possibility of that is Tuchel’s comments to the press post-match, during which he praised Havertz’s ability to drop into the “half-spaces” and link with the rest of Chelsea’s attack. Here’s what the Blues boss had to say in full speaking in wake of the game.

Could Kai Havertz be the answer to Chelsea’s woes through the middle?