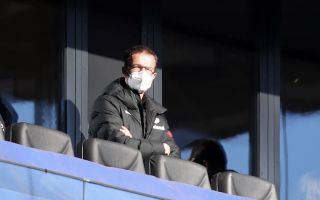 According to reports, West Ham United’s hierarchy are trying to recruit Eintracht Frankfurt’s Fredi Bobic as the club’s new director of football.

SportBILD (as relayed by Hammers News), recently claimed that the Londoners are keen to back ‘untouchable’ David Moyes in the summer market and feel a new DoF would be a smart acquisition.

Moyes, who is on course to guide the Hammers to their best finish in 35 years, has not been shy in publicly admitting the club could do with reassessing their transfer policies.

Bobic is a highly-rated recruitment specialist, especially in Germany.

After being responsible for some of Eintracht’s recent shrewd signings, including Andre Silva and Amin Younes, the Slovenian-born talent spotter has seen his reputation increase, ten-fold.

If recent reports are anything to go by though, Bobic, like some of his signings, could be set for a big move himself.

It has been claimed that in an attempt to back their impressive gaffer, David Gold and co. are hopeful they can offer transfer support by way of a new DoF.