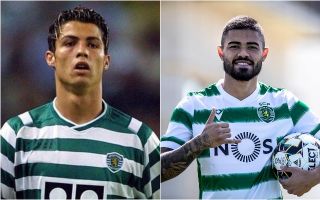 Sporting Lisbon winger Bruno Tabata has joked about Cristiano Ronaldo’s potential return to the club with a tweet responding to a video of his mum Dolores cheering on the Portuguese giants.

Ronaldo started his career at Sporting before making his name at Manchester United and Real Madrid, and he’s now a star player at Serie A giants Juventus.

MORE: Why Man Utd are taking a gamble with Solskjaer contract

At 36 years of age, however, it could soon be that Ronaldo will have to think about stepping down to a slightly lower level, and it might well be that he’d like the idea of returning to the club where it all started for him.

This would no doubt be a dream signing for Sporting, with Portuguese football writer Tom Kundert noting that Tabata’s tweet has got people talking.

See below as Tabata is quote-tweeted after joking that if Ronaldo wants to come back to Sporting, he’ll have to ask him for his number 7 shirt…

Speculation that Ronaldo returning to Sporting to finish his career, fuelled partly by his mother posting videos celebrating Sporting's wins with Cristiano's SCP shirt. Response from Sporting No.7 Bruno Tabata: "Calm down Mrs Dolores, Ronaldo still has to ask me for the No.7"! https://t.co/SOk6Droequ

It would be truly special to see Ronaldo return to Sporting instead of doing what many big names do and chase the money in the MLS or Qatar for the final years of their careers.