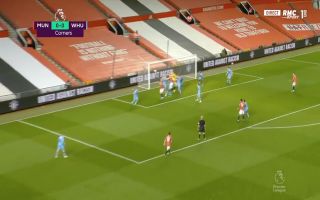 In the 52nd minute of this evening’s Premier League encounter between Manchester United and West Ham, a corner was won after some quality play from Mason Greenwood on the right-wing.

Bruno Fernandes whipped a corner into the box, at the near post, Scott McTominay flexed his towering presence to win the header amongst the crowd.

The midfielder’s effort was turned into the back of the net after a deflection from Hammers defender Craig Dawson, whose put the ball into his own net with his head in a flipping of his usual script.

Ole Gunnar Solskjaer’s side had some quality chances in the first-half, when they were missed, it looked uncertain as to how the side would take the lead against the Hammers.